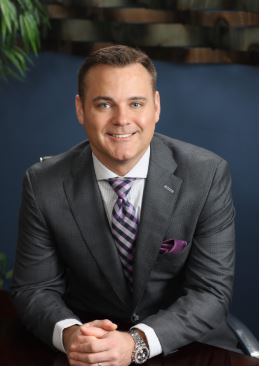 Joshua P. Myers is a founding partner of the Premier Personal Injury Law Firm, Schultz & Myers Personal Injury Lawyers, LLC. Mr. Myers exclusively focuses his practice on Personal Injury Law and specializes in Tractor-Trailer Semi-Truck Accident cases. He is known throughout the community as a fierce advocate for injury victims and takes a no-nonsense “guerilla warfare” approach when fighting the insurance companies.

Throughout his career, Josh Myers has devoted 100% of his time to fighting for injury victims. This intense focus on injury law as the foundation which has led to his successes. In just the past several years alone, he has helped obtain tens of millions of dollars in settlements and judgments.

In 2010, the Missouri Lawyers Weekly named him as one of Missouri’s “Up & Coming Lawyers”. He was later honored by Missouri Lawyer’s Weekly as on of the “Winningest Lawyers” based upon his trial results.

In 2018, he was named as one of the “Best Lawyers in America” by U.S. News and World Report in the field of Insurance Litigation.

A native of Missouri, he attended Missouri State University (Southwest Missouri State University) where he earned his degree in Political Science and a minor in Spanish. Upon graduation, he was accepted into the nationally renowned law program at Washington University in St. Louis. However, he was not just another face in the crowd. While there, he was named the Myron Gollub Scholar and invited for induction into Who’s Who Among American Law Students.

During his final year of law school, Josh was accepted into the school’s nationally recognized mock trial team where he studied trial skills under St. Louis City Judge David Mason. Due to his outstanding trial skills, he was named as a member of The Order of the Barristers.

The experienced trial lawyer with practices in Missouri, Illinois, and Arkansas has authored books to help readers navigate through their personal injury claims. Though he can’t personally represent every victim of a trucking accident, car accident, or workplace injury, these how-to guides provide personal injury victims a roadmap as to what to expect during the settlement process. You can order Josh’s personal injury books online or call us at 314-444-4444 to request one.

Josh Myers is a recognized leader in tractor-trailer accident cases. On more than one occasion, Josh Myers has been requested by the Missouri Bar as a lecturer for other attorneys handling personal injury claims involving tractor-trailers.

Josh uses his own expertise to help attorneys–even those who do not work at his law firm–in maximizing settlements and getting adequate compensation for their potential clients.

In his own law firm, Josh often takes complex cases involving insurance disputes such as insurance bad faith and vexatious refusal to pay claims. When the insurance company is not offering a fair amount, Josh uses his creativity and expertise in contract interpretation including stacking and resolving insurance ambiguities.

Other honors include being pictured in St. Louis Magazine’s 2009, 2010, 2011, and 2012 “Best Lawyers in Missouri” edition, admittance into the Multi-Million Dollar Advocates Forum, being featured in Super Lawyers as a Rising Star, named by Missouri Lawyers Weekly as one of the state’s Up & Coming Lawyers, and also named among the Top 40 Lawyers Under 40 in Missouri.

“Best Lawyers in America” by U.S. News and World Report for Insurance Litigation

Listed Among the Top 100 Trial Attorneys in Missouri