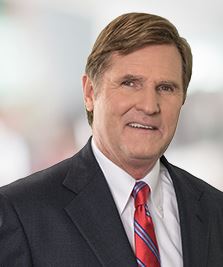 Mike Papantonio is a senior partner with the law firm of Levin Papantonio. He has received numerous multi-million dollar verdicts on behalf of victims of corporate malfeasance. His award-winning work handling thousands of mass tort cases throughout the nation has helped make Levin Papantonio one of the largest plaintiff law firms in the country.

Mr. Papantonio is one of the few living attorneys inducted into the Trial Lawyer Hall of Fame. He is listed in the publications Best Lawyers in America and Leading American Attorney.

In 2019, Mr. Papantonio was awarded the Compassionate Gladiator Award from the Florida Justice Association.

In 2017, Mr. Papantonio and the firm’s C8 trial team helped secure a $920 million dollar settlement against DuPont, related to the company’s West Virginia plant discharging the chemical PFOA (C8) into the air and water around the Ohio River Valley and exposing citizens to this toxic Teflon chemical.

In 2015, Mr. Papantonio was inducted into the National Trial Lawyers' Hall of Fame. He also was awarded the Defender of Justice Award by the American Association for Justice.

In 2014, the Stephen and Sandra Sheller Center of Temple University Beasley School of Law presented Mr. Papantonio with the Inaugural Award for Social Justice, honoring him for his outstanding contributions to social justice.

In 2012, Mr. Papantonio served as President of The National Trial Lawyers.

In 2011, Mr. Papantonio was awarded the Perry Nichols Award, the highest honor given by the Florida Justice Association. The award recognizes individuals who fight valiantly and with distinction for justice throughout their lives.

In 2008, Mr. Papantonio was selected by the Public Justice Foundation as a finalist for its Trial Lawyer of the Year Award.

In 2007, as lead trial counsel in the environmental class action case of Perrine v. Dupont, Mr. Papantonio received a jury verdict for a West Virginia community with an estimated value in excess of $380 million.

In 1998, Mr. Papantonio teamed with Robert F. Kennedy, Jr., the Hudson Riverkeepers, and Water Keeper Alliance to establish a Riverkeepers program in Northwest Florida known as the Emerald Coastkeepers, Inc., a full-time organization that serves the community as a public advocate for the waterways of Northwest Florida. Coastkeepers and Riverkeepers are known for their willingness to take polluters to court.

Mr. Papantonio has authored and co-authored instructional articles on handling complex litigation for trial lawyers. He is the founder of the cutting-edge conference, Mass Torts Made Perfect, which trains thousands of lawyers on how to better their legal practice. The organization has hosted speakers such as former President Bill Clinton, James Carville, Johnnie Cochran, Bob Woodward, Jack Kemp, Al Sharpton, Arianna Huffington, Dick Morris, Paul Begala, Dan Rather, and F. Lee Bailey.

Mr. Papantonio is an author of four motivational books for lawyers, and a series of legal thrillers. He is also co-author of Air America: The Playbook, which was listed by The New York Times as a Political Best Seller.

Mr. Papantonio is the host of the international television show America’s Lawyer, where he provides in-depth investigations into major corporate and government corruption. He is also the founder and former host of the nationally syndicated radio program Ring of Fire, along with Robert F. Kennedy, Jr. and Sam Seder.

Mr. Papantonio’s role on Ring of Fire is featured in the movie, Jesus Camp, which was nominated for the 2007 Academy Award for Documentary Feature. He also was featured in the documentary, The Devil We Know, highlighting the dangers of DuPont's manmade chemical C8. As a political commentator, he has frequently appeared on MSNBC, Free Speech TV, RT America Network, and Fox News.

·       Board Certified Trial Lawyer, National Board of Trial Advocacy

·       American Board of Trial Advocates

·       Defender of Justice Award by the American Association for Justice (2015)

·       Defenses You Can Count on in an Asbestosis Case