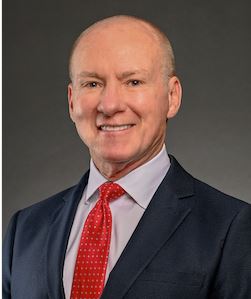 Austin represents people in bad faith insurance and ERISA claims, who have been treated unfairly and who don't get their claims paid fairly or promptly by insurance companies. It happens all too often.

Austin lives downtown Lexington with his wife, Jill Hall, who is also an attorney. They enjoy outdoor activities including skiing, boating, and cycling, and visiting their three children who live in Nashville, Colorado Springs, and Chicago.

Austin is a volunteer board member of the Fayette County Bar Association Foundation, a nonprofit that manages and donates money to various community legal nonprofit organizations to help people in the central Kentucky community. He is on the Board of the Carnegie Learning Center, a Lexington based non-profit that helps people, primarily children, to read and write. He volunteers his legal expertise to help people with limited resources on pro bono cases. Austin also devotes time to volunteer at the Fayette County Legal Help Center.

His published book “Bad Faith Insurance Law in Kentucky,” a book focusing on insurance law and the way insurance companies treated people, has been read by other lawyers and judges to understand how insurance companies sometimes treat people unfairly and in violation of our laws.

Austin has developed a law practice of 39 years, concentrating on representing individuals who have received unfair treatment on insurance claims.

Mr. Mehr is frequently asked to lecture on the topic of insurance bad faith in Kentucky. In addition to in-state lectures, he also lectures in other states around the country and out-of-country locations such as Ontario, Canada. Some of Mr. Mehr’s speaking engagements include:

Evidence of Other Bad Acts To Support Punitive Damages After BMW v. Gore. How To Handle The Cries Of “Prejudice” Before The Trial And The Cries Of “Unsupported By The Evidence” After The Verdict, Kentucky Academy of Trial Attorneys (June 2002)

"Was Removal Proper Under ERISA? Why a Motion to Remand May Be Appropriate," The Kentucky Justice Association, The Advocate (March/April 2008)

"Bad Faith Verdicts and Appeals – What Are Your Chances?," The Advocate (2009)

"Admissibility of Litigation Conduct in a Bad Faith Trial," The Kentucky Academy of Trial Attorneys, The Advocate (March/April 2007)

"ERISA Preemption? Maybe, Maybe Not! Analysis of the Safe Harbor Provisions," The Kentucky Academy of Trial Attorneys, The Advocate (March/April 2006)

"Grange Mutual Ins. Co. v. Trude, A Change in the Landscape of Discovery for Bad Faith Cases," The Kentucky Academy of Trial Attorneys, The Advocate (March/April 2005)

"How to Practice a Third Party Bad Faith Case," Kentucky Academy of Trial Attorneys (May 1999)