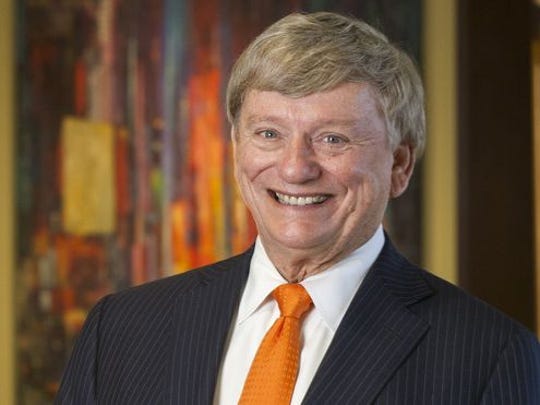 Rusty Hardin is the founder and leader of Rusty Hardin & Associates, LLP. A 1965 graduate of Wesleyan University in Middletown, Connecticut, Rusty earned his law degree in 1975 at Southern Methodist University in Dallas, Texas. After graduating from Wesleyan and before law school, Rusty taught American history at Montgomery Academy in Montgomery, Alabama, and spent five years in the U.S. Army, leaving with the rank of Captain after 15 months in Vietnam. He also spent a year as a legislative assistant to Congressman Charles R. Jonas, Republican of North Carolina.

Before entering private practice, Rusty established his reputation as an assistant district attorney in Houston for over 15 years. During that period, he never lost a felony jury trial, tried 14 death penalty cases, tried over 100 felony jury trials, and earned renown for his cross-examination skills in celebrated cases.

Before leaving the District Attorney’s office in 1990, Rusty was named Texas Prosecutor of the Year in 1989 and was featured in numerous news articles for his trial skills. In 1990, he founded Texas People Against Crime (TPAC), a statewide organization dedicated to addressing criminal justice issues from the perspective of crime victims and law enforcement.

Rusty entered private practice in 1991 as a founding partner of Hardin, Beers, Hagstette & Davidson, engaging in a civil and criminal trial practice at both the state and federal levels. In 1994, he was named Chief Trial Counsel for the Whitewater Independent Counsel’s Office, serving under both Bob Fiske and Ken Starr. In 1996, he established Rusty Hardin & Associates.

Since entering private practice in 1991, Rusty has tried over 70 jury trials, fairly evenly split between civil and criminal cases. Rusty enjoys nothing more than pleading cases before juries. “I love the challenge of trying to persuade a group of strangers to my point of view,” says Rusty. “From my years of experience on both sides of the courtroom, whether prosecuting or defending a client, I have found that juries almost always do the right thing. Even when I disagree, I can see how they got there.”

In 2015 Hardin was named a “Trial Ace” by Law360, given a Texas Lawyer Lifetime Achievement award, named a “Lion of the Texas Bar” by Texas Lawbook, and inducted into both the International Academy of Trial Lawyers and the American College of Trial Lawyers.

Rusty is a nationally recognized speaker on trial tactics, which includes counseling lawyers on dealing with the media during high-profile cases. Hardin has three simple rules for media relations: “Always return their calls. Always tell them the truth. If you can’t talk to them, explain why.”

Rusty and wife Tissy were married in 1970. Rusty and Tissy have two sons, Russell and Thomas. Russell is a high school teacher in Houston, and Thomas is an officer in the Houston Police Department.

Named one of “The 100 Most Influential Lawyers in America,” National Law Journal 2013

Named one of “The 25 Greatest Texas Lawyers of the Past Quarter-Century,” Texas Lawyer, 2010

“Attorney to Hire When You’re in Trouble,” Houston Chronicle, 2003