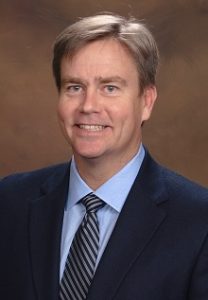 Chad T. Wilson grew up in Southeast Texas, graduated from Port Neches-CTWilsonGroves High School with honors and, after receiving a congressional appointment, attended the United States Merchant Marine Academy in Kings Point, New York. He was one of only twelve midshipmen who successfully completed a dual Bachelor of Science program in marine engineering and marine transportation/nautical science. He spent two six-month semesters at sea aboard ocean-going ships, as both a deck and engine cadet, with more than two dozen international ports of call.

Mr. Wilson was aboard one of the first merchant vessels to restock military supplies in Kuwait after The First Gulf War and made numerous trips to U.S. military bases in the Far East to replenish their jet fuel reserves. Mr. Wilson successfully passed both the U.S. Coast Guard License exams for Third Mate-unlimited gross tonnage / any ocean and Third Assistant Engineer-unlimited horsepower, steam or diesel. Upon graduating, Mr. Wilson was commissioned as an officer in the United States Navy as part of the Strategic Merchant Marine Ready Reserve and was promoted to O-3 lieutenant during his time of service.

Mr. Wilson has 20 years of experience in the oil and gas industry, having worked on every type of offshore drilling rig in every capacity and managed engineering projects and operations. After gaining hands-on experience, he was tasked with multi-million dollar contracts and business development and attended the University of Chicago Graduate School of Business Executive Sales Management program and later attended South Texas College of Law at night.

After graduating from South Texas College of Law, Mr. Wilson accepted a two-year deal with an oil and gas super-major to secure and manage contracts for their offshore development in the Federal Republic of Nigeria and served as a liaison among the legal, procurement and drilling clients.

Upon returning to the United States, Mr. Wilson founded the Chad T. Wilson Law Firm and has focused his experience and education into helping people with issues concerning all types of contracts.

United States Court of Appeals for the Fifth Circuit

United States District Court for the District of Colorado

United States District Court for the Southern District of Texas

United States District Court for the Western District of Texas

United States District Court for the Northern District of Texas

United States District Court for the Eastern District of Texas