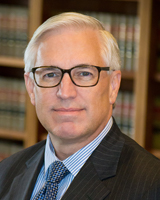 Scott Fraley was born in Sweetwater, Texas on December 30, 1957. He attended the University of Texas, graduating with his B.A. degree in the Plan II Honors Program in 1982, with special honors. Mr. Fraley then attended the University of Texas School of Law, serving on the Texas Law Review. He graduated cum laude with his J.D. degree in 1985. He then joined Scott, Douglass & McConnico, LLP (then known as Scott, Douglass and Luton, LLP), making partner and helping open the Dallas office of that firm. In 1995, Mr. Fraley and his then-wife, Elizabeth M. Fraley, formed Fraley & Fraley, LLP, a trial defense firm, where he served as Managing Partner. During that time, Mr. Fraley taught as an Adjunct Professor of Insurance Law at Baylor Law School and at the University of Texas School of Law. In August 2015, after 30 years of active litigation and appellate practice, including medical malpractice, products liability, insurance coverage, construction, employment, and other personal injury, Mr. Fraley joined Baylor Law School as a Professor in its Legal Writing Program, where he served as Director, until August 2019, when he joined Chamberlain McHaney in Austin as Senior Counsel.

Mr. Fraley is admitted to practice before the Texas Supreme Court, the U.S. District Courts for the Northern, Western, and Eastern Districts of Texas, and the Fifth Circuit Court of Appeals. He has given CLE presentations for the Texas Bar, the Texas Association of Defense Counsel, and the Bar of the Fifth Circuit Court of Appeals, among others. Mr. Fraley is a Certified Health Care Arbitrator for the American Health Lawyers Association, a Life Fellow of the Texas Bar Foundation, and AV Rated by Martindale Hubbell.

Mr. Fraley is the proud father of twins, Zachary Scott Fraley and Alexandra Kendall Fraley, and of Kathryn Elizabeth Fraley. Mr. Fraley is an avid sports fan, especially of football, hockey, and golf.

University of Texas School of Law